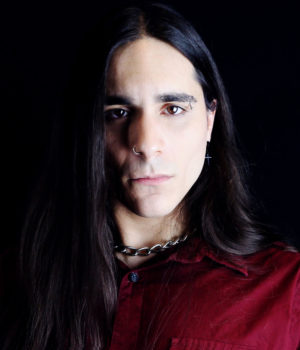 Iason Mistsis, aka Jason Crosby Mistsis was born in Amarousion, Attica on May 3, 1991.
His musical journey began in 2008, at the age of 17, as the main composer, lyricist and main vocalist of the metal band ‘Headshot’, with whom he published two self financed E.P. Albums, entitled, ‘The Pain Within’ (2009) and ‘Decay’ (2011). Headshot also published one of the first ever, 360o technology music videos, with IAM360 and Schoolwave Festival in 2008 for the song ’Seek the Fire’, Live at Schoolwave Festival.
In 2013 he graduated from the Franz Liszt Academy of Music in Budapest, double majoring in Music Education and Opera Studies.
He studied Opera/Bel Canto Singing and Piano at the National Conservatory of Greece and received a Diploma in Classical Harmony/ Counterpoint as well as in Choir Conduction from the The International Kodaly Company and Kodaly Institute and Conservatory in 2014.
In 2015 Jason got a diploma majoring in Contemporary Music and Performance from Philippos Nakas Conservatory/ Berklee College of Music, and a diploma in Popular Vocals from the University of West London.
In his teaching career he has worked in and collaborated with the National Conservatory of Greece as a Vocal Coach and Classical Harmony Tutor, the National Theater of Greece, the National and Kapodistrian University of Athens and the International Collective ‘Aegean Cultural Initiative’, as an Instructor and tutor in many seminars, lectures and individual lessons, among other Conservatories and Music Schools in Athens,Greece.
Through the years, Jason has performed more than 250 live shows and recorded more 600 hours of material in collaboration with many Greek and International artists such as Giannis Mathes, Richard Smith, Mimis Plessas, Tibor Szappanos and the metal band ‘Septic Flesh’ among others, peaking in the Opera, ‘Rigoletto’ (G.Verdi) as ‘Rigoletto’, with the National Philharmonic Orchestra of Hungary (2011), the oratorio ‘Psalmus Hungaricus‘ (Z. Kodaly) with the National Symphonic Orchestra of Greece (2014) and the musical play ´Τρωϊκός Πόλεμος´, of ´Elliniki Theamaton´ and Pallas Theater (2014).
Since 2014, he has been working as professional voice actor, and has done dubbing, voice performance, singing and choir work on behalf of international player companies such as Disney, Dreamworks, Netflix etc in productions such as Tangled, the Series (2017), Mary Poppins Returns (2018), Aladdin (2019) and Lion King (2019) among others.
In 2019 he proudly became Director of Music, in the department of music, of Akindynos Gkikas’ Open Studios/Open Theater.