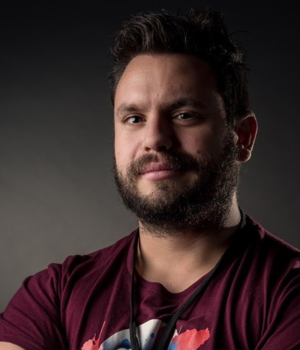 Tasos Ntapantas is a voice actor who made his dream into reality by attending to voice acting seminars of Open Theater Art. Now he is in the position of Project Manager for Anime & Video Games Productions.

– He was born and raised in Athens. His passion for voice acting appeared in very young age, where he was trying to copy voices from people around him. He met Akindynos Gkikas at 2017 during his Dubbing course at Theater Of Changes (TOC). After this, he attended in the first Dubbing seminar of Open Theater Art at 2018. He succeed in completing the course and he certificated from Akindynos Gkikas.

– His professional Voice Acting Career started at November 2018.
– He is a radio producer for 10 years and now he is the leader of the only Anime Radio in Greece ( Goradio.gr). He is collaborating with the Embassy of Japan in Greece and participate in their events. He also managed to make some interviews with Japanese Voice Actors for first time in Greece. All of these years, Tasos managed to introduce the Art of Anime to a lot of people in Greece by presenting it due to his web radio station.
-With his team they participate in the biggest Gaming events in Greece where many fans attending to meet him.
– In his free time he loves to watch Anime Series or playing videogames with friends. He is very positive person and he like to spread positive energy to people.