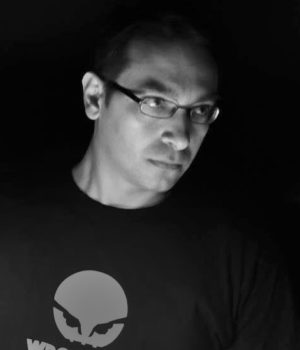 Sotiris Laskaris was born in Athens in 1983.

He holds a degree in the Department of Music Technology and Acoustics of TEI of Crete in Rethymnon.

He has been working as a sound engineer since 2007 in the fields of studio, live and education.

In 2008 he started to work as a dubbing engineer and location recordist at AZ Studios in productions of DeAgostini, Universal, BBC, VTB productions and others.

Since 2011, he has been working as location recordist and sound designer for independent short-award-winning short film productions and in the international award-winning feature “Unknown Land” by Other Side Films.

In 2014 he starts his own business providing sound engineering and sound design services.

From 2015 to 2020, he collaborated as a sound recording engineer at the radio commercials of the Onassis Foundation.

From 2016 to 2018 he worked as a dubbing engineer at Sierra Post studio in productions of Netflix, Disney, Mattel and others.

In 2019 he collaborates as a post production mixer in World Sound Productions’ documentary features and films.

He is audiovisual technician and advisor of the Kimolos International Film Festival.

From 2012 until today he works as a trainer in Public Vocational Institutes of Athens in Music Technology and Sound Engineering Courses.

In 2014 he presented Sound Design techniques at the “Making an Independent Film” workshop organized by the 1st Independent Gothenburg Film Festival in Sweden.