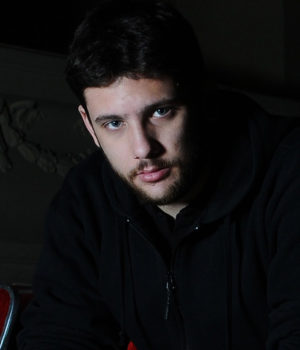 He is a graduate of the “Athens Conservatory” School of Drama.

Since he was a child he participated in films on television: “Ο Κανονιέρης ” (1987) directed by Andreas Katsimitsoulia with Yiannis Vouros, “Καλοκαιρινές Αταξίες ” (1989) directed by Vangelis Balafoutis with Stamatis Gardelis and Linda Giga, “Ένα μωρό στο ταξί μου” (1989) directed by Kostas Karagiannis with Panos Michalopoulos.

His first encounter with the theater began with his birth, since both his parents Giannis Mataragkas and Teta Konstanta are actors. But his own first theatrical steps began in 1996 with his participation in the play “The Liar ” by Carlo Goldoni, a “Θεατρικό σανίδι” production, directed by George Belos.

In 2007 he participated in William Shakespeare’s “Dream of the Summer Night” production of “Ωρών” and directed by Yannis Mataragas and in 2009 in the play “The Bourgeois Gentleman” of Moliere, directed by Teta Konstanta.

In 2008 he participates as an actor at the Olympic Flame Ceremony choreographed by Artemis Ignatiou and orchestrated by Philippos Tsalahouris.

After graduating from Drama School in 2009, he was assistant director at the play “Calendar Girls” directed by Konstantinos Arvanitakis, production of “Ελληνική θεαμάτων”.

In 2010 he participates in the 2nd performance for teenagers in Greece entitled “Burying Your Brother in the Pavement” by Jack Thorne, which took place at «ΧΩΡΑ» theater under the direction of Tzorzina Kakoudaki.

His cinema debut comes in 2011 with his participation in the feature film “Paradise” by Panagiotis Fafoutis.

During the period 2011-2012 he participates in Aristophanes’ play “Birds” directed by Tzorzina Kakoudaki. A co-production of “4Frontal”, ” Θεάτρου του Νέου Κόσμου ” and the Network for the Theater in Education, with the support of the “Ω2” Group (Athens School of Drama Association).

He has participated in television and radio commercials in Greece and Cyprus.

In 2016, together with Georgia Ioannidou, he co-founded cubiVox channel on YouTube.

Since 1995 he has lent his voice to numerous motion pictures, video tapes, children’s series, documentaries and games. From 2018 he directs children’s series and films in the field of dubbing.